Our thoughts and prayers go out to the Welch family. I only met Bob once many years ago. He was a sincerely kind person and I was honored to have helped bring one of his historical guitars back to life. ~ Colin Burch, July 7, 2012

The following article is re-published here for commentary purposes, posterity’s sake (I can no longer find it on Gibson.com) and because I helped to restore this guitar when I once worked for Gibson’s Warranty Repair department many years ago. This article was originally published on Gibson.com in 1996. Currently, I am in no way associated with Gibson nor do I represent Gibson Guitars in any way.

DON’T DRINK AND DREMEL: THE SAGA OF BOB WELCH’S ES-345

Imagine being a rock star with lots of guitars, a few drinks and an idea. This was the situation faced by Bob Welch [in 1972]. The original guitarist of Fleetwood Mac wanted a guitar that combined the best qualities of his Gibson with the sounds of various single coil axes. Since the Nighthawk was sadly not available at the time (an ax Mr. Welch proudly plays these days), he decided to pretend he was an R&D guy. The brunt of his Jeckel and Hyde madness was an ill-fated ES-345.

In Mr. Welch’s own words:

“This tragedy occurred in the winter of 1972. I was in England, probably in the middle of the Bare Trees album with Fleetwood Mac. We were all living south of London in a place called Hedly Downs in this big house that Mick and John owned. There were about 15 people living there: Mick Fleetwood, his wife, John McVie and his Christine, me, my girlfriend, Danny Kerwin and his girlfriend, road crew people. And there was this guy by the name of Jeff Cribbet who was one of John McVie’s drinking buddies, who was also a pretty good bass player. So I think one night, if I remember correctly, we just got really drunk. And Jeff was sort of an amateur hobbyist and he convinced me that it would be nice to have a “Gibocaster.” Because at that time, there wasn’t anything available that combined the two types of guitars. For instance, today, you have the Nighthawk, where you can get that single coil sound with the Gibson playability. But our idea, misguided as it was, was to go stick some Fender electronics into a Gibson body. And Jeff picked on my 345. As the night wore on, I think Jeff had a Dremel Moto tool and a half-inch drill. I think that was the sum total of our equipment. We were drinking beer, and having brandy and vodkas. By the time it got to five in the morning, it was a smoking ruin. I put this guitar in its case.”

Fortunately, Mr. Welch turned the instrument over to Roger Fritz and Colin Burch of Gibson’s Warranty Repair department about six months ago. Granted, this damage is not covered under warranty, but the two managed to resurrect the instrument, and restore its pre-1972 condition.

“Until Roger in the shop had revived it, it had not seen the light of day, literally, that case has not been opened for 20 years,” Welch said. “I was so embarrassed. I decided to swallow and bring it out here six months ago. I’m glad I did.”

For now, Welch is busy enjoying his new-old guitar. In a few months, however, make sure to check it out on display at the Rock and Roll Hall of Fame in Cleveland, Ohio. According to Welch, this particular instrument is important because it was the guitar used almost exclusively on Future Games, Bare Trees and Mystery To Me, some of Fleetwood Mac’s most important early albums. The guitar is featured prominently on the singles “Hypnotize” and “Sentimental lady.”

In 1996, Welch still wonders why he would do such a thing to such a historically significant guitar.

“Luckily I made those records before I trashed it.”

The first thing I needed to do was remove the neck. In the first photo you can see the 20th-22nd frets have been removed. I then drilled a small hole into the neck pocket and we steamed the neck off using an espresso machines with a hose clamped to it and fitted with an air needle (used to pump basketballs).Here are some photos of the repair that I took while working on the guitar. The process was rather straight forward. Once the guitar was on my bench and inspected, we decided to replace the top of the ES-345.

Once the neck was removed, I routed the binding off and gently pried the guitar’s top off using a razor knife, scraper and chisels. Next I glued and clamped the new top on, routed a new binding channel and neck slot. I then re-glued the neck and installed new binding.

Roger Fritz completed the guitar by painting the guitar with an exact match of the original sunburst lacquer finish… even “aged” it yellow just a bit. 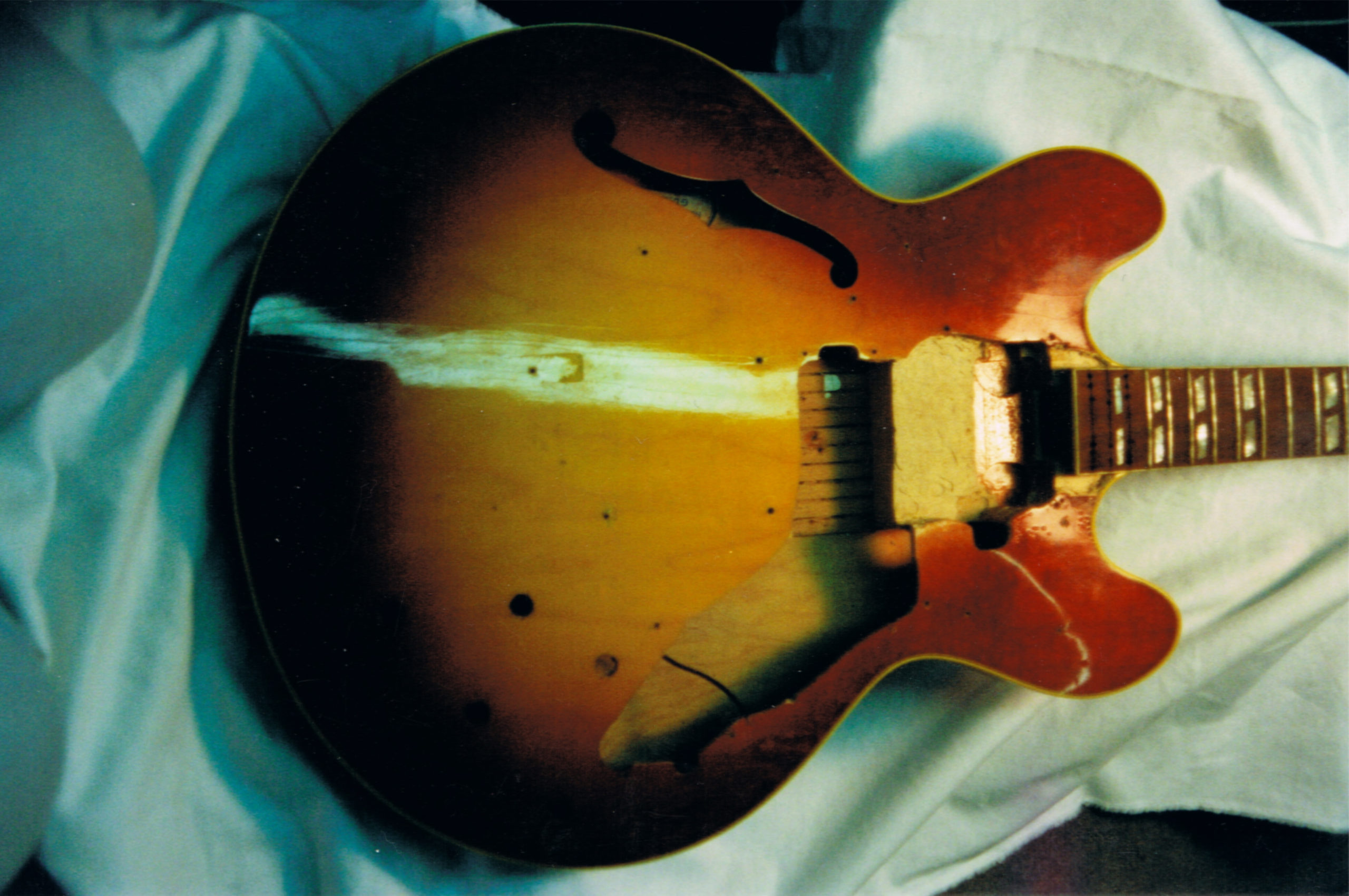 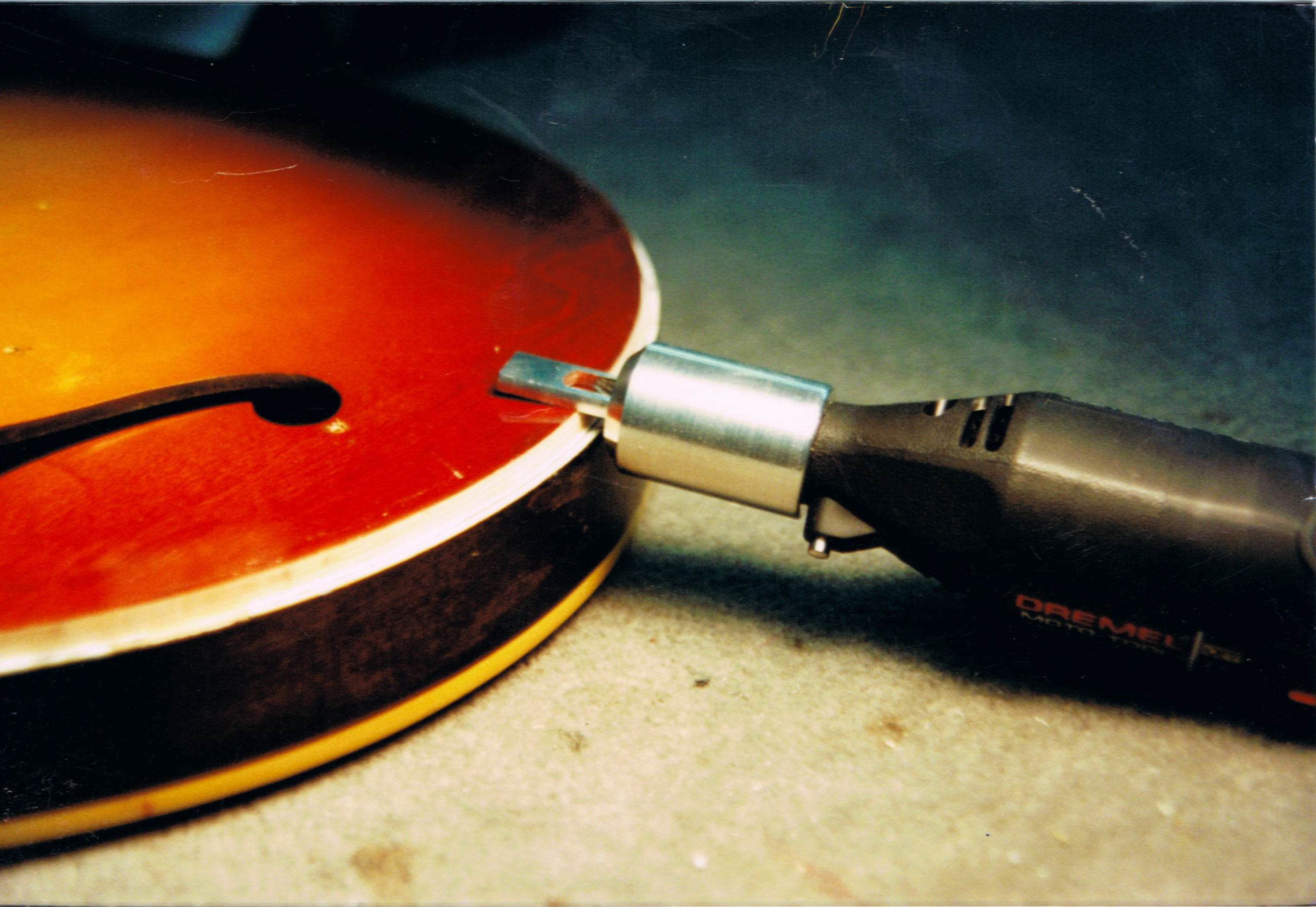 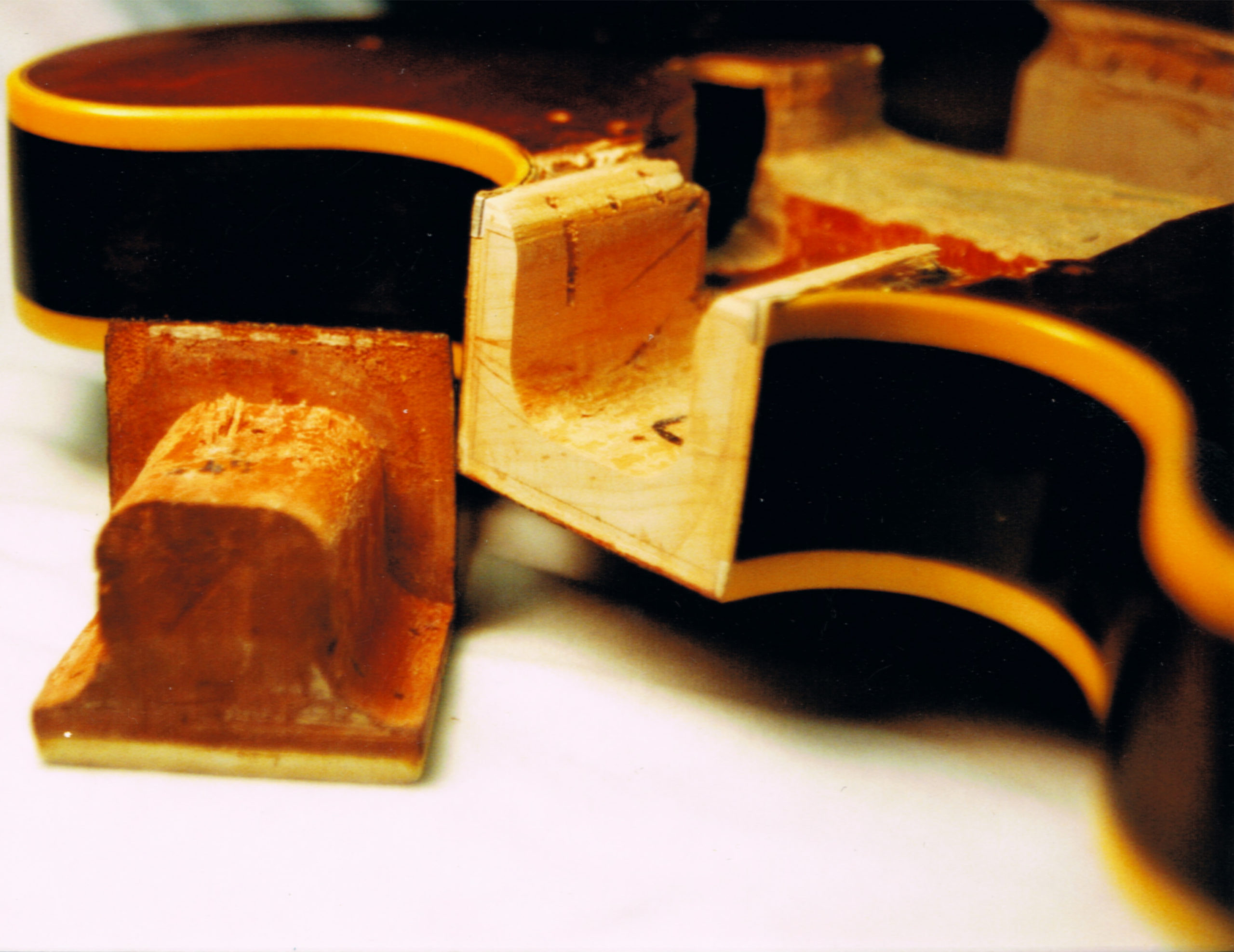 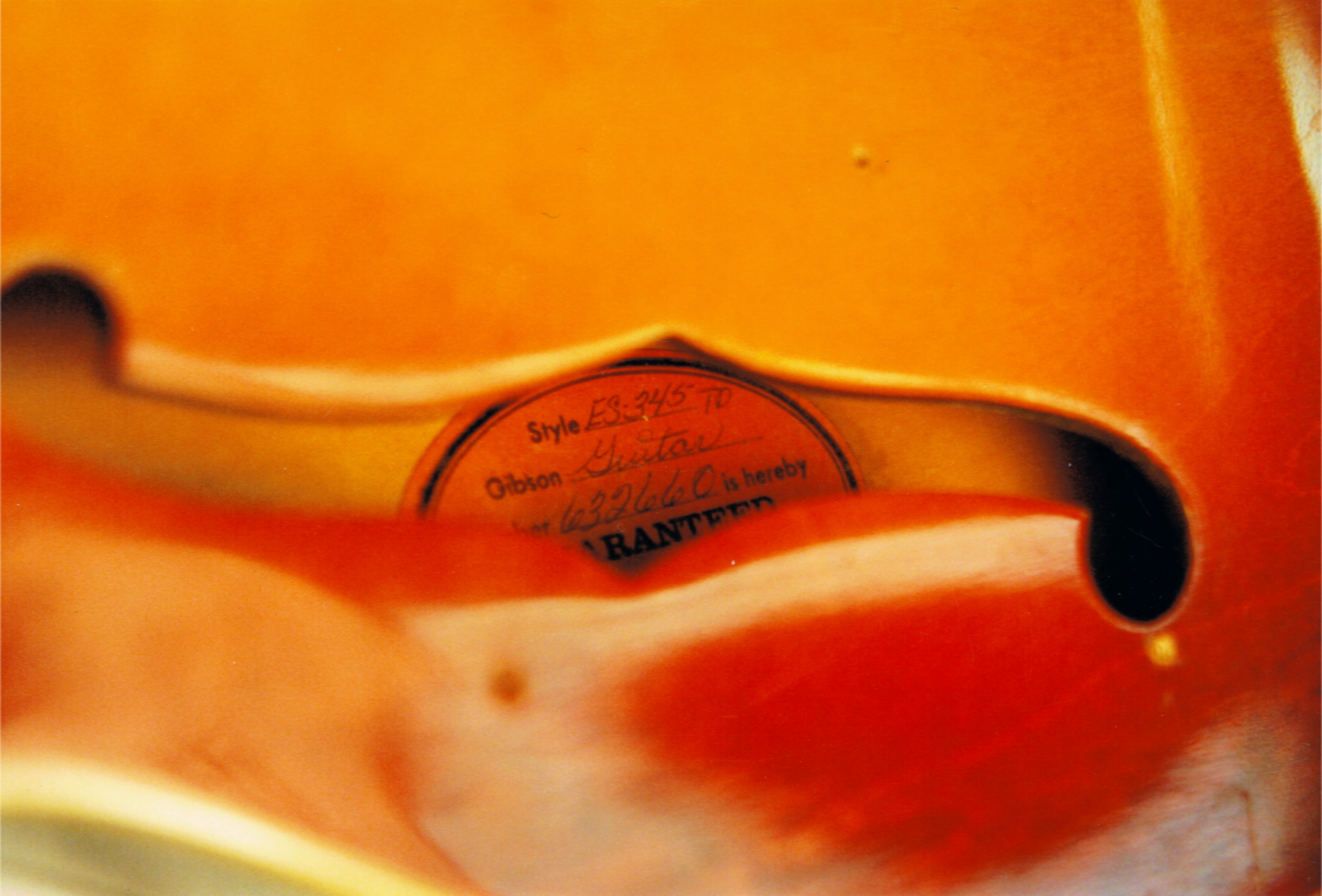 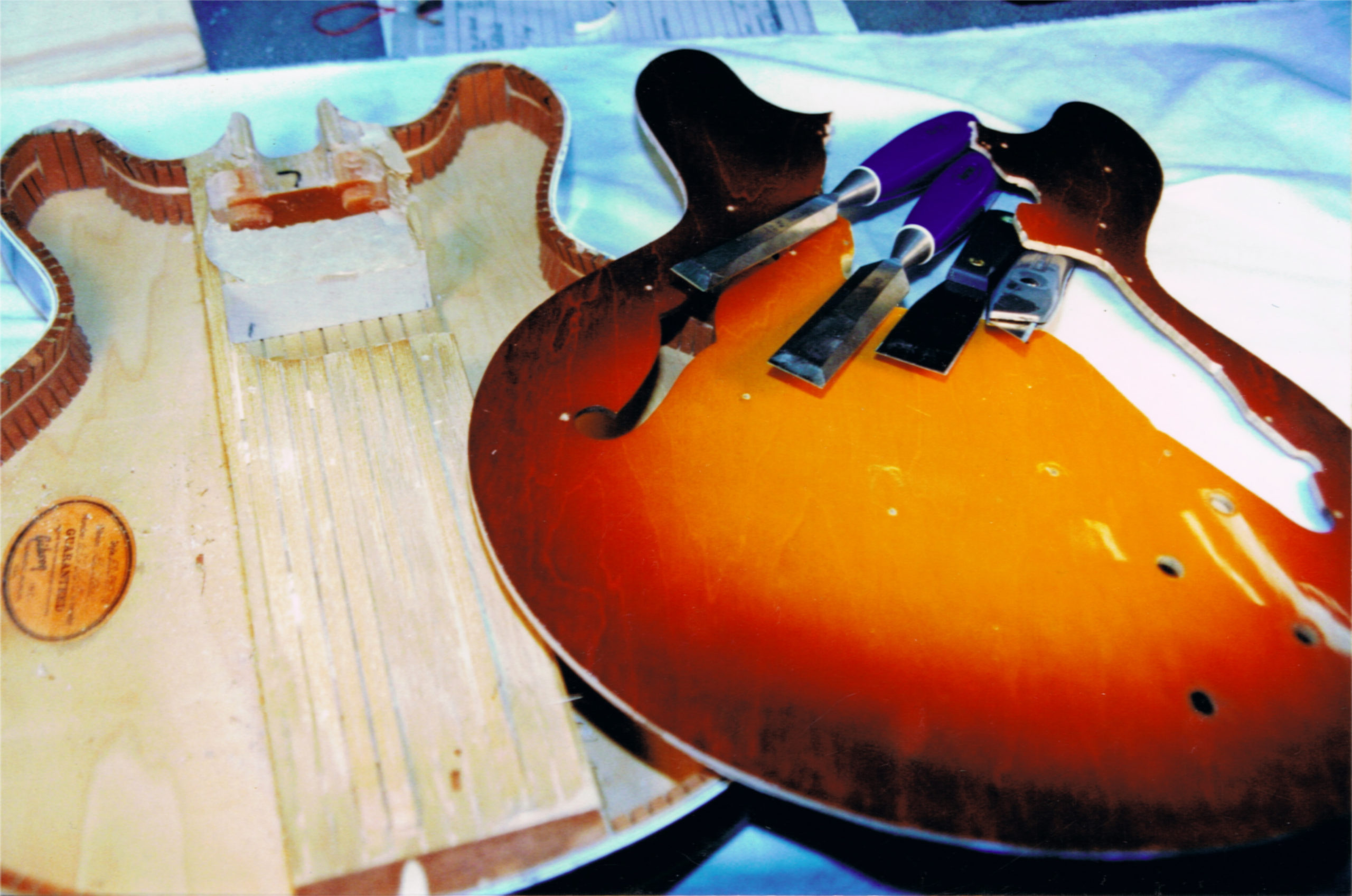 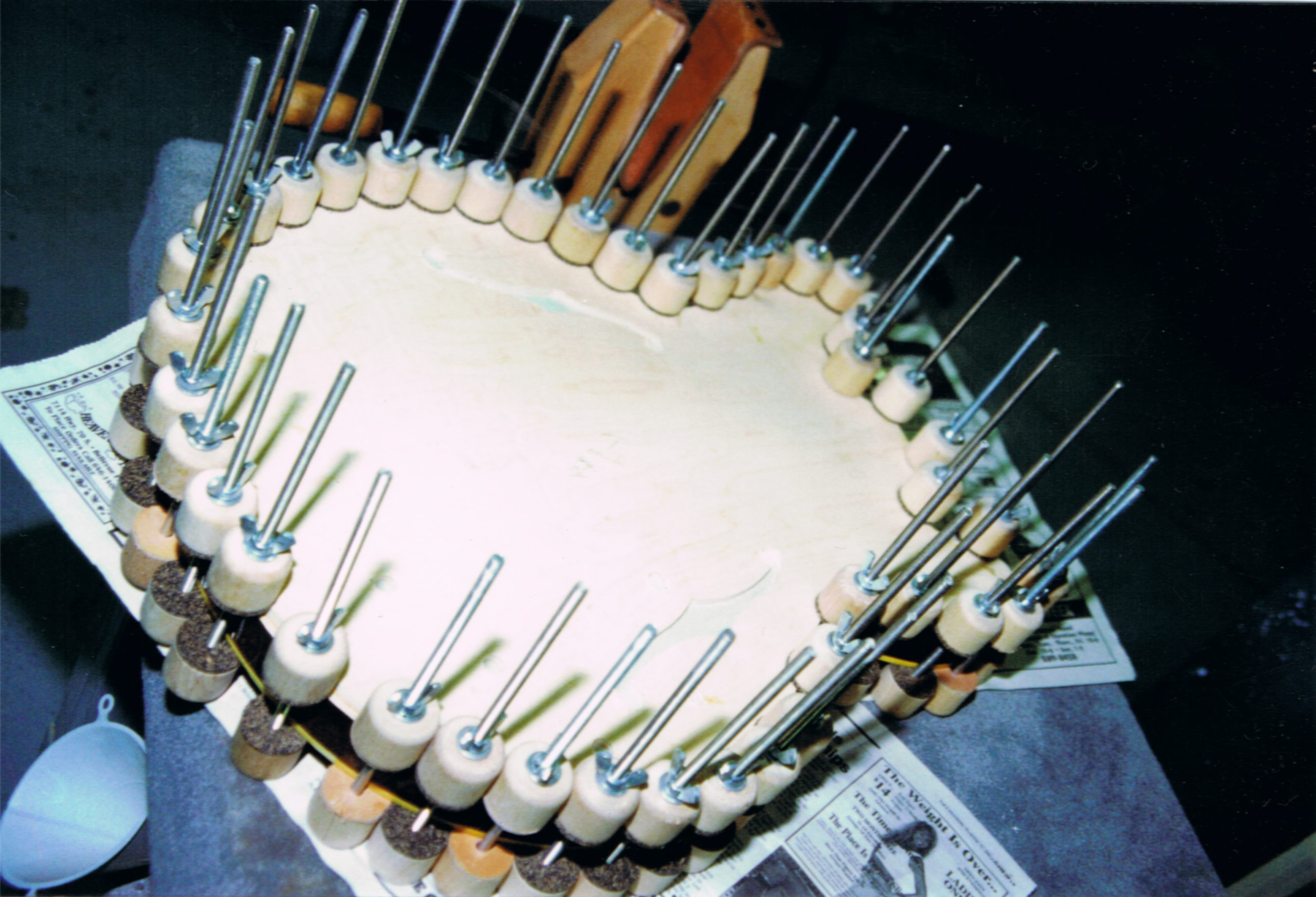 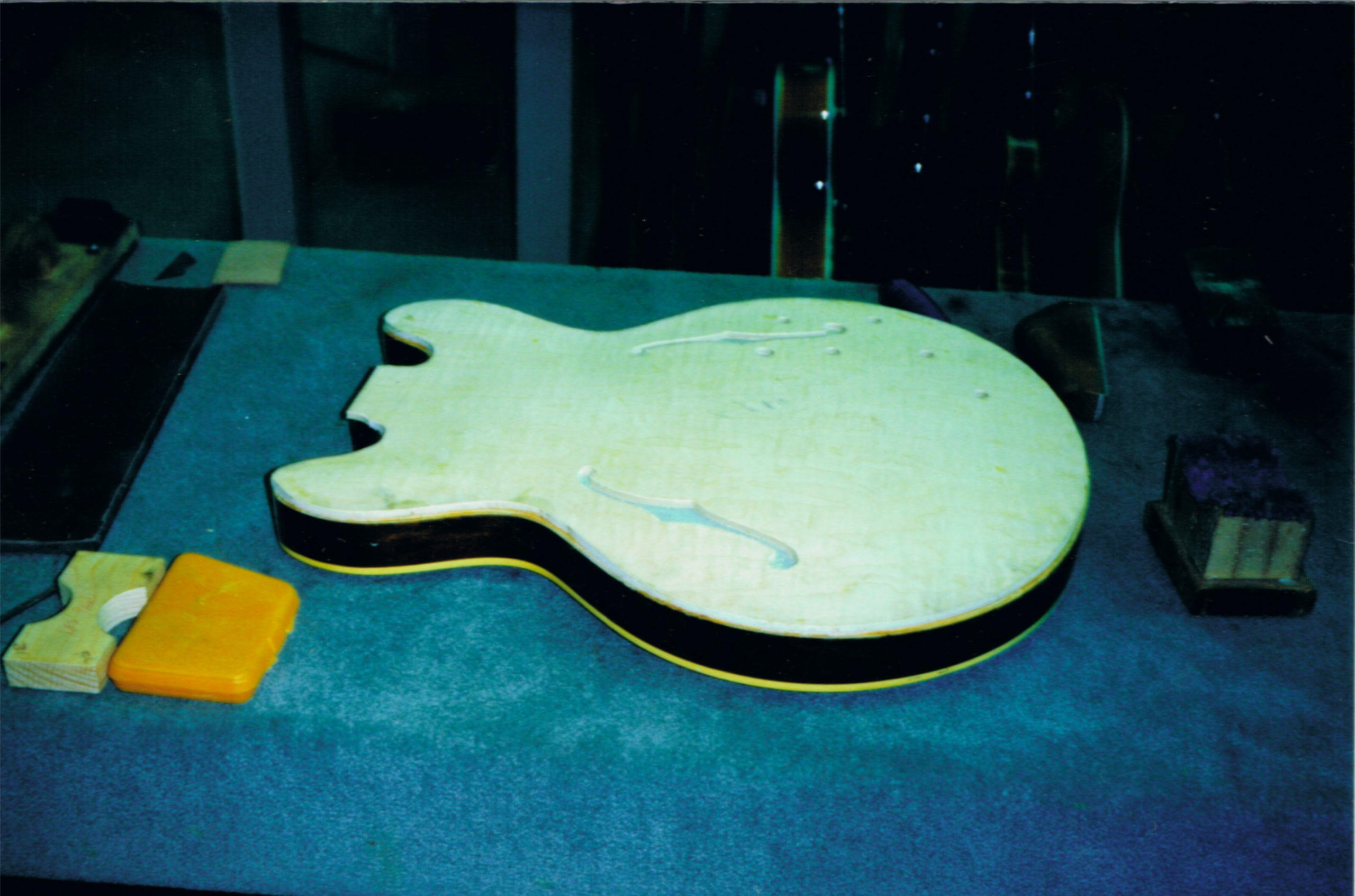