In March of 2014, I visited Port Harcourt, Nigeria to create some short films telling the story of how SFCC is affecting change in that part of the world.

I visited Nigeria in 2009, but I amazingly neglected to remember just how brutally hot and relentlessly humid this African nation is. During the 2014 trip, the high temperatures and humidity caused my Nikon D-3400 camera to overheat and shut down on multiple occasions. I have read about “operational temperature ranges” in equipment manuals, however, I have never experienced any piece of equipment fail because of extreme temperatures.

So as I prepared to return to Nigeria in early 2015, I began researching how I might be able to avoid overheating the camera by using some sort of cooling device. I was hoping to find an existing product I could simply buy online and have shown up the next day. But I had no luck finding such a product.

I expanded my search and I ran across a site dedicated to Astronomy Photography. Evidently, creating super long exposure photographs with a DSLR causes the camera’s sensors to heat up. And having hot photo sensors creates a grainy effect in the final photo. Thus, there are a handful of astronomy blogs describing how they made various cooling devices in order to create grain-free photos of deep space.

The main cooling component is a Thermoelectric Cooler (TEC). Here is how Wikipedia describes the component:

Thermoelectric coolers operate by the Peltier effect (which also goes by the more general name thermoelectric effect). The device has two sides, and when DC current flows through the device, it brings heat from one side to the other, so that one side gets cooler while the other gets hotter. The “hot” side is attached to a heat sink so that it remains at ambient temperature, while the cool side goes below room temperature. 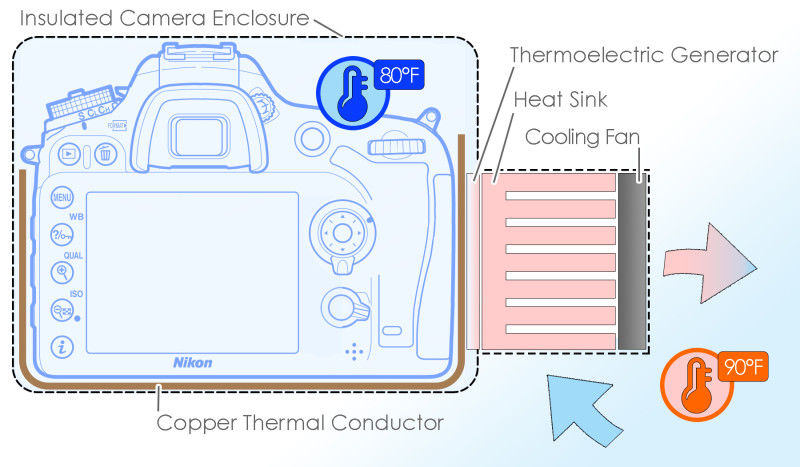 Since one side of a TEC gets cold and the other side gets hot, the heat from the “hot side” of the TEC must be displaced in order to have the unit act as a cooling device. To accomplish this, I attached a heat sink to the TEC along with a small electric fan to create an exhaustive air flow.

I then attached the “cold side” of the TEC to a thin copper frame that wrapped around the camera. I fabricated this frame using thin, malleable copper sheeting. The idea was to have the TEC cool the highly conductive copper thus distributing the cooler temperatures around the camera.

In order to keep the cold temperature close to the camera, I worked with a local seamstress to fabricate an enclosure made from insulation fabric. The enclosure included two clear polyurethane “windows” so I could still see the camera’s LCD displays.

I used a simple metal project box to hold the electronics. I modified it with holes for the power switch and LED, a digital thermometer, and exhaust vents. A portable power supply (used to recharge mobile phones) powered the device.

Once it was assembled, it weighed about 1.5 pounds, not insignificant when it would have to be carried every moment for a week in the African heat. 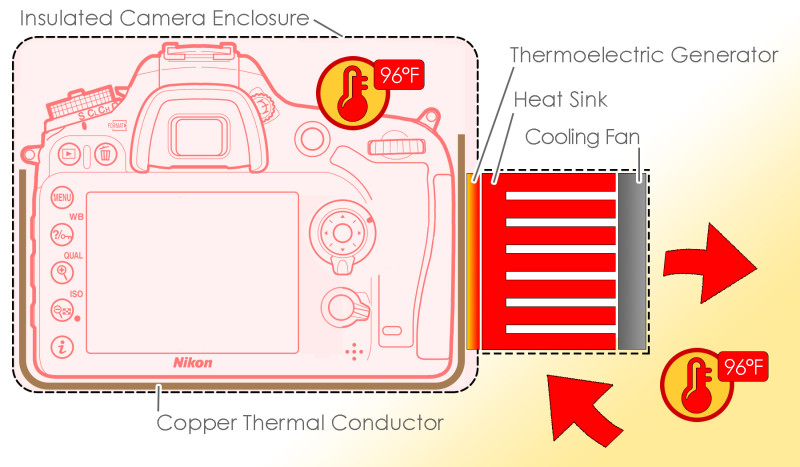 The final step was to do a real-world test. The last thing I wanted to do was to try this out for the first time in Nigeria. So, I moved our Dyson portable heater into our small guest water closet, jacked up the thermostat, closed the door and waited for the heat to build up.

I set up the camera rig exactly as it would be used in Nigeria and started recording video. As the small room turned into an oversized Easy Bake Oven, the Camera Cooler did a great job of keeping the temperature inside the enclosure at least 10°F cooler than the outside ambient temperature.

However, as the ambient room temperature passed 96°F, the interior temperature began to significantly rise. Within a few minutes, the internal temperature matched the external, ambient temperature. The device had failed and thus, it did not make the trip to Nigeria.

Even though it eventually failed, it was still a fun experiment.